Eileen Chambers, long-standing member of the Leicester Group, and its secretary for over 30 years, died on 20th August 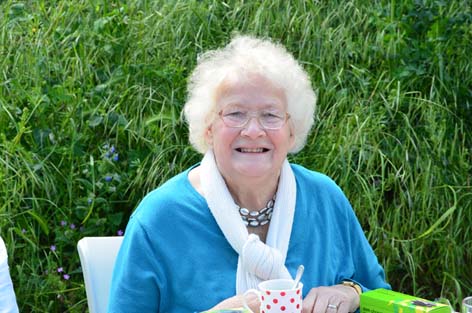 Malcolm Elliott, one of our founder members and a former chairman, has written this tribute.
“The Leicester Group of the Victorian Society began 40 years ago, as a result of the initial drive and enthusiasm of Professor Jim Dyos, but it was the untiring efficiency of Eileen, as our general secretary, that sustained us over the next 30 years. She never faltered in her commitment to the work, always dealing with correspondence, taking notes, suggesting speakers and keeping the rest of the committee on its toes. She never lost sight of the importance of case-work, seeing it as a primary function of the Society to preserve our local heritage of Victorian architecture, but alongside the serious work she was always keen to make the local group fun and attractive to new members with its talks and excursions. Eileen was the veritable rock on which the Leicester Group was built.”
Carole Face, a long-term committee member, recalls:
“I first met Eileen in 1990 when I joined the Victorian Society. She had been a committee member and secretary of the Leicester Group since shortly after its inception, over 40 years ago now. On my first Victorian Society event, Eileen was chatting to me in her usual friendly way, making me feel very welcome. She discovered that I worked in finance, and told me that the post of treasurer was soon to become vacant. I volunteered, and immediately joined the committee.
“Eileen was a pivotal member of the Victorian Society. In her role of secretary, she also produced the newsletter, which in those days consisted of several A4 sheets of information, most of which she had typed. Eileen found plenty of other work on the committee to occupy herself, preparing the agenda for our committee meetings and the paperwork for the AGM, in her usual efficient style.
“Eileen’s cheerful presence on the welcome desk at our lecture evenings will be greatly missed; she made a point of greeting new visitors and asking how they had heard about The Victorian Society.
“Eileen had many interests alongside the Victorian Society: she was vice-chairman of the Birstall Local History Group, and supported her late husband Brett in a number of sporting activities. The large congregation for Eileen’s Thanksgiving Service at All Saints, Thurcaston on 15th September bears testament to how deeply she was respected, and to how much she will be missed.”

Find out what’s happening in your area: