Camberwell Baths is apparently the earliest surviving public baths (1891) by Henry Spalding and Alfred WS Cross who came to specialise in this building type. 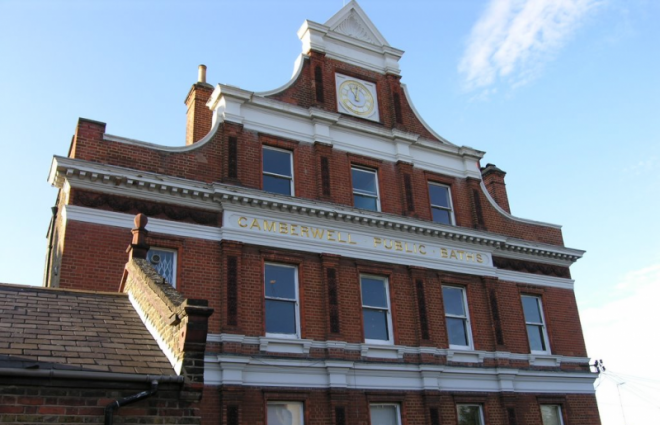 Cross later wrote the key text on the subject, Public Baths and Wash-Houses A Treatise on Their Planning, Design, Arrangement, and Fitting (Batsford, 1906).

They certainly made a show with their entrance elevation. It is a large site, but with only a relatively small front, tucked away down Artichoke Place so it needed to make an impression. This range is only a room or so deep; the pool halls themselves are single-storey and run back behind. There is a plaque on the front between the doors recording the names of all involved. The gilded architectural lettering beneath the cornice is very handsome.

The pay box in the lobby is original as are, by the looks of it, the floor tiles. But what about the stained glass 'Public Baths' sign? Inside, the pool hall has elaborate balcony fronts but there is little other surviving decoration. The effect relies instead on the generous proportions of the pool hall, the top lighting and chunky supporting woodwork.