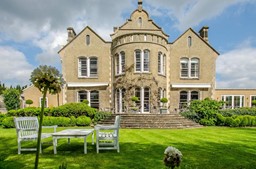 The council pledged to achieve half carbon emissions by 2030 and reduce them to zero by 2050. If it is serious about achieving this it must reject plans which wastefully demolish, rather than re-use, high quality historic buildings. The Victorian Society has objected to the planning application to demolish the villa and build a care home. Despite having previously been re-developed into a hotel complex much of the building’s Victorian architecture and beauty has been preserved so far. More than 50 public objections to the plans have been submitted to South Cambridgeshire District Council which has yet to give a date for when a decision is expected.

Olivia Stockdale, Conservation Advisor for the Society says that ‘Although unlisted this is a high-quality building is in good condition and eminently suitable for retention and a sympathetic conversion rather than wholesale demolition. The historic core could easily provide attractive communal spaces for a care home. Re-using our buildings is vital in a climate emergency and would follow Historic England’s guidance on the importance of reusing and recycling buildings as a way of tackling climate change.’

The 170-year-old building has obvious architectural and historical significance as part of Cambridge’s 19th century expansion.