Declared unsafe and in imminent danger of collapse by Cardiff Council in 2013, a thorough heritage assessment is urgently needed 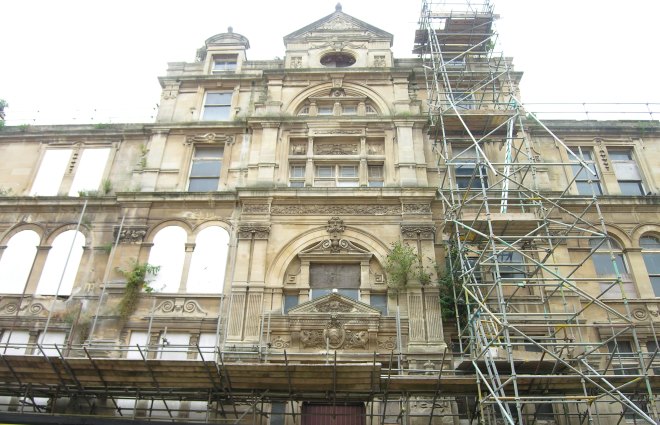 Among the most prominent buildings listed in the Top Ten is the Coal Exchange in Cardiff. The Coal Exchange is a huge building reflecting Cardiff's status in the 19th century coal export trade - it was reputedly here that the first recorded million-pound business deal was made. The exchange closed in 1958 but the impressive architecture and early 20th century interiors remain. The Coal Exchange recently operated as a music venue but it was suddenly declared unsafe and in imminent danger of collapse by Cardiff Council in 2013.

The Council claims to be convinced of the building's structural instability although no conservation report has been produced to verify this claim. Nor is the Society aware of any remedial work having been carried out. Cabinet meeting papers, obtained by local campaigners, include costings for a "demolition scheme" and "retention of facades".

Rather than considering such damaging action the Council should carry out a thorough heritage assessment and work with all interested parties to restore this important part of both Wales' and Cardiff's history.

South Wales also featured in 2013's Top Ten when Swansea's Palace Theatre was listed. There has been some good news for the theatre since then as Swansea Council has offered a grant of over £70,000 for repair works, subject to the owner obtaining three quotes for having the work carried out. Sadly, the building's owner has not as yet been able to provide these quotes and the building remains in danger.

Other Welsh buildings nominated by the public for inclusion in the Top Ten included Plas Gwynfryn, Llanystumdwy, where Gwynedd Council are reluctant to use their powers against an offshore owner, and the former Market Hall, Stanley Street, Holyhead where the owner is refusing to sell to the Council.