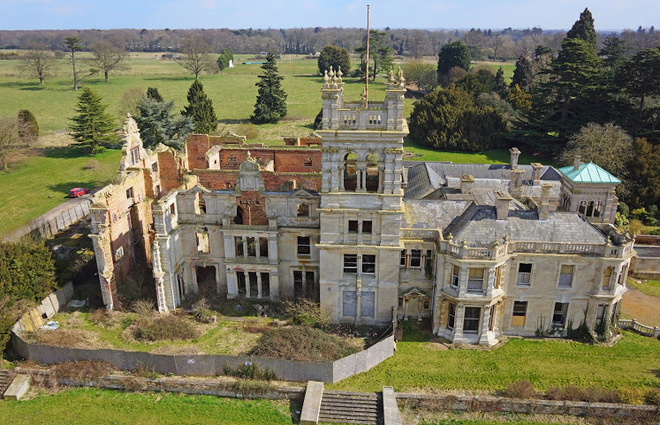 The Victorian Society today reveals that Overstone Hall, Northampton, is one of 2015’s Top Ten Most Endangered Victorian and Edwardian Buildings in England and Wales. The Society urges the Hall’s owner to take action to ensure the building survives- selling for less than £1 million if necessary.

Inclusion in the Society's Top Ten often leads to national exposure and new interest in the buildings selected which can help save them. Griff Rhys Jones, Victorian Society Vice President, said in a video launching the Top Ten, " Share the list around. These are buildings that need help, and we need you to help them."

Overstone Hall was highly advanced when new, built with double walls, giving it the earliest known cavity wall insulation. It also had a central heating system, gas lighting and a butler’s lift. However, Lord Overstone is said to have disliked the design and never lived there. Today, the building remains unloved – around half is a burnt out shell after a fire in 2001. The New Testament Church of God put the hall up for sale in 2010 for £1million but it remains unsold at that high price. The Church was reportedly ordered to carry out work to ensure public safety in June after severe vandalism. The owners should face up to the responsibility of owning a historic building and take action to ensure it survives - potentially by selling it a more realistic price.

Director of the Victorian Society, Christopher Costelloe, said: ‘We're grateful to everyone who nominated Overstone Hall. Like all the buildings included in this year's Top Ten, Overstone Hall is a listed building meaning that the Government has recognised its national importance. Overstone deserves better than its current situation. I urge the public to share the Top Ten list, and Griff’s message, to help raise awareness of these buildings and help them to find the investment they desperately need.’

If the Top Ten has inspired you to help us fight to save great Victorian and Edwardian architecture you can join us here, click the 'donate' button at the very bottom of this page or just text VICT00 followed by either £1, £2, £3, £4, £5 or £10 to 70070. 100% of your donation will be received by the Society to help us to help us continue our campaigns.