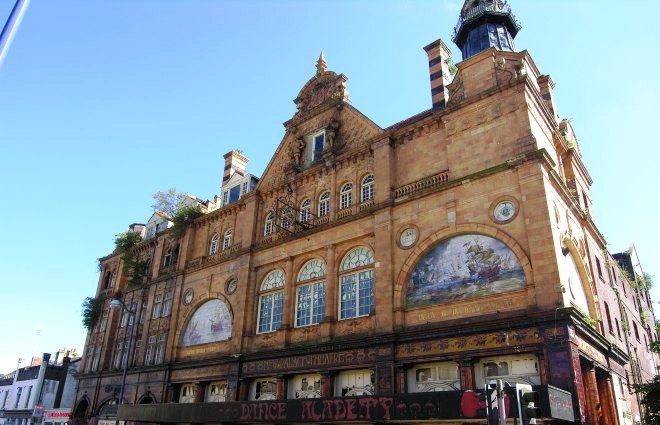 See selection of photos of the buildings on Picasa.

England and Wales’s top ten most threatened Victorian and Edwardian buildings of 2013 have been revealed by the Victorian Society.

The publication of the 2013 Top Ten follows a national appeal to find the best and most at risk buildings. Across the country local residents, historians, enthusiasts and campaigners suggested Victorian or Edwardian buildings at risk in their local area.

The Victorian Society runs the campaign annually to highlight the problems facing many of our historic buildings in the hope of both saving the particular buildings listed and also drawing the public’s attention to our endangered heritage.

The Top Ten includes civic buildings such as the monumental Accrington Conservative Club in Lancashire and Fenton Town Hall in Stoke. Several celebrate the heyday of Victorian popular entertainment and leisure: the Palace Theatres in both Swansea and in Plymouth and the Royal Victoria Pavilion on the seafront in Ramsgate.

The church of St John in Crawshawbooth, Lancashire, saturated with damp and mould after the theft of its lead flashings, highlights the terrible consequences of vandalism and theft.

We are delighted that so many members of the public have answered our call to arms and have nominated so many important buildings in urgent need of help. Too often these buildings are being boarded up and left to fall apart while owners and local authorities debate their future or, worse, forget about them. Water seeps into the building, plants take root and vandals strip them.

It is vital that new uses are found for these buildings - the longer they lie empty the harder they are to save. Our heritage is a finite resource and even in tough economic times we must make sure that the best Victorian and Edwardian architecture is not lost for future generations.

As for the buildings featured on the Victorian Society’s Top Ten Endangered Buildings previously, there was some good news: in May the Prince’s Trust unveiled plans to renovate the Wedgwood Institute, in Burslem, Stoke-on-Trent as a centre for small businesses.

Swansea University has taken action to make Hendrefoilan House watertight. However worry about the future of Butterley Spillway continues: a decision is awaited from Kirklees Council on Yorkshire Water’s plans to replace the spillway stone with concrete.