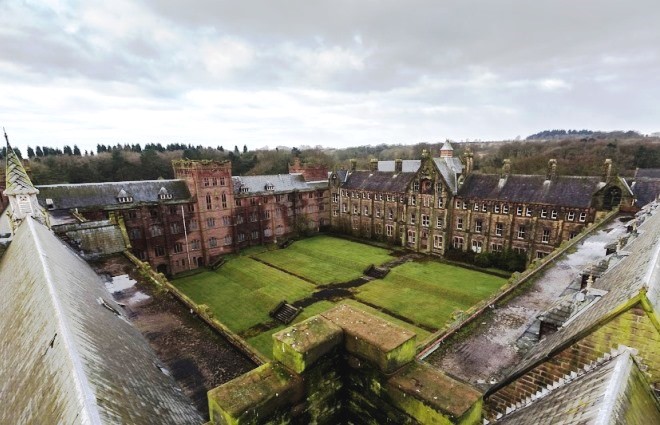 National architectural charity, the Victorian Society, has included three Lancashire & Greater Manchester buildings on its 2016 list of the Top Ten Endangered in England and Wales. For the first time there are no buildings in London and the South East on the list - where the Society had comparatively few nominations. The Society considers that the greater number of buildings nominated from elsewhere may reflect the more difficult development situation outside the South East. Griff Rhys Jones, Victorian Society Vice President, has urged people living near the buildings on the list to ‘seize the opportunity' and campaign to save them.

This large and impressive three storey complex of gothic sandstone buildings, reportedly sits at the geographic centre of the Roman Catholic Diocese of Liverpool and bears witness to a time when many young men wanted to train to become priests. Numbers dramatically declined after the 1960s and the seminary became a boarding school in the 1980s for boys considering a vocation. Alumni reportedly include the comedians Tom O'Connor and Johnny Vegas (who is said to have left after becoming homesick). The buildings closed in the early 1990s and have been slowly decaying ever since, becoming a mecca for ‘urban explorers' some of whom have damaged the interior. Just 15 minutes' drive from Wigan surely a residential conversion is possible? Pictures are here and online video footage is here.

The national exposure from inclusion in the Society's Top Ten often leads to new interest in the buildings which can help save them. Full details of all the buildings in the 2016 Top Ten, and updates on positive developments for last year's buildings, can be found here.

Victorian Society Director, Christopher Costelloe, said: ‘Lancashire and the north west has more buildings on our Top Ten than anywhere else in the country. But for the first time we have no entries for London or the South East. We simply got far more nominations from areas like Lancashire. This perhaps reflects the vastly different financial climate for development. But whatever the reason, I hope inclusion in the Top Ten will spur local authorities and owners to urgently find a way to bring these buildings back into use. At a time when there has been much discussion of creating a northern power house this is more important than ever. Retaining historic buildings like those in the Top Ten is vital to maintaining local identity and creating places in which people want to invest, live and work.'

Griff Rhys Jones, Victorian Society Vice President, said: ‘The nationally important buildings on the Victorian Society's Top Ten list are in dire need of help. Many of them are in prominent locations in their towns and cities. Following my experience with the Hackney Empire I know how difficult finding funding can be - especially outside London. However, restoring important historic buildings is worth investing in as it can be a catalyst for wider regeneration. I hope people living near these buildings will seize this opportunity and campaign to save them. Ultimately, it is the support of local people which will ensure that they are not lost forever.'

Thank you to "Proj3ct M4yh3m" www.proj3ctm4yh3m.com and Fragglehunter who provided pictures of the building. More photos of St Josephs Seminary are here.